(Note to other admins, would it it be nice to open a yardsale subforum?)

Bit of a late reply, but yeah, I think a yardsale subforum would be nice. Put it under the safehaven category.

Quote from: IvoahI'm not sure if I'm actually going to enter the contest, but I whipped this up the other night in PICO-8. I wasn't really thinking of the cemetech contest at the time, but I think I could turn this into some sort of puzzle game, and then port it to Nspire Lua.

Quote from: KermMartianOh man, I'm already sold. If you don't port that to the CE and/or write a PICO-8 emulator for the CE, I'll be very disappointed.

This probably won't be making its way to the CE for two reasons:
1) I don't have a CE

I do hope I'll have more time to work on it though, and maybe even turn it into a game

Quote from: IvoahSmall update: I got switching tracks working! It meant hand entering a bunch of data into a table, but it works. I also revamped how the rail detection works, which allowed me to add the switching.

Quote from: UnicornAwesome! Will you be able to create your own tracks? This is starting to look like a level editor...

Yep, I didn't realize that I never made an update post about that. Right now you can place every type of track, including switching tracks, by placing two tracks on top of each other. I'm still not entirely sure how I'm going to turn this into a game. Definitely going to make some sort of puzzle...

July 04, 2016, 03:20:49 AM
For those who don't know, SGDQ is happening this week. SGDQ is a week long event of 24/7 videogame speed-running for charity. Throughout the week they take donations and have raffles and other incentives. All donations go to doctors without borders.

May 09, 2016, 12:07:00 AM
So my friend made a 37 minute long animated movie, which by itself wouldn't be terribly impressive, except for the program he used to make it. The entire thing (aside from text cutscenes) was made in powerpoint. He made each individual frame, copying the one before it and moving the different shapes. He uses it as a vector art suite instead of a slideshow creator. Anyways, you can watch it here:

Other / Ain't More Thing To Climb

For those of you who don't know what it is, Rocket League is a computer game where you play soccer with rocket powered cars. It's super fun, and I would highly recommend checking it out.

I'd love to be able to play with codewalruses, so far I've played a few games with Unicorn.
#9

February 23, 2016, 03:51:04 AM
So as some people lurking in IRC already know, I started work on a CHIP-8 emulator a little under a year and a half ago. I just picked it back up a couple days ago, and have made some major progress. It was originally written in C++, and I wanted to first write it for the computer using SDL, and then port it to the Nspire, hence the name "nCHIP-8." The C++ to C conversion was surprisingly easy! I'm not sure I did it the right way, but at least it works. Basically, I put all the data stuff in a struct, and renamed the functions to
Code Select Expand
chip8_blah()
All the functions take a pointer to a chip8 struct as their first argument, and then just edit that.

I've ported it to the GBA, and it runs great, except for a few bugs in the actual core that I need to fix.

As the CHIP-8 has 16 buttons and the GBA only has 10, I have to make a keymap for each game. If you want to try out Space Invaders here's a ROM you can run on an emulator (or real hardware): https://sr.ht/MfIH.gba
I personally recommend mGBA

Next steps are (in no particular order):

The emulator core is pretty easy to use, and as such makes it a breeze to port to other platforms. The GBA port only took about an hour to go from SDL to GBA.
Source for everything is here: https://github.com/Ivoah/nCHIP-8
#10

Quote from: MEGA65MEGA65 is an open-source new and open C65-like computer.
Hardware designs and software are open-source (LGPL).

I'm going to try to do all of them on the right days, but I dunno if I'll have the time. Post your solutions to the problems in the thread. I'll update this post as I solve the puzzles

Instead of updating this post whenever I finish a new puzzle, I've put them all in a github repo: https://github.com/Ivoah/AdventofCode
#12

Quote from: Cemetech
After a long hiatus from contests, Cemetech is holding Cemetech Contest 14 in cooperation with members jonbush and earthnite. This short contest challenges TI-BASIC programmers to program an AI for the well-known Connect 4 game. Entries will be judged on the speed and accuracy of their AIs. Jonbush and earthnite originally conceived of this contest while making a Connect 4 game of their own, and the winning entry will in fact be incorporated into the game as the official AI. They drew up a thorough set of rules, guidelines, and resources that entrants should read before beginning their entries. The Connect 4 AIs submitted to the contest must use specific variables for input and output, consist of no more than 2KB of TI-BASIC code and three subprograms, and may not take any additional user input while they compute the next move.

We're excited to be working with jonbush and earthnite to hold this contest. Thanks to an automated grading script designed by jonbush, the results will have a much faster turnaround than most contests: the final deadline is December 5th, 2015 at 11:59:59pm ET, and results will be posted here on Cemetech the next day. For full guidelines and rules, do check the contest website, and remember to post in the attached Cemetech topic if you are entering. Unlike other Cemetech contests, no dedicated per-entry topic is required. The summarized details:

Best of luck to all the entrants, and we can't wait to see the clever solutions people create.

October 05, 2015, 03:13:50 AM
Earlier this year I backed the C.H.I.P computer on kickstarter: http://kck.st/1H3QfZj
I initially got one for my little brother to learn to program/use linux, but then decided that I was so tiny and cheap that I needed one for myself too

I have a 320x240 LCD module that I use with my Pi, and hopefully will be able to get to work with the C.H.I.P.
I'd have a super tiny computer that would probably even be able to run PICO-8 (once/if zep releases a Pi version).
It has built-in WiFi, bluetooth, 4 GB flash, LiPo charging circuit, and more, all for just $9.
The kickstarter is already over, but you can pre-order one at their website: http://nextthing.co/
It's a shame that it won't be shipping until May

July 01, 2015, 04:17:57 AM
I'm working on a super simple SPI library for the TI-8[34]\+( C?SE)? calculators. The goal is to be able to control some Adafruit DotStar individually addressable LEDs with my calculator. I have the basic SPI part done, and I've managed to bang out a "library" for controlling up to 256 LEDs from the linkport. Here's a picture of it running on my 84+ SE: The code can be found here: https://github.com/Ivoah/z80DotStar

You might notice the two microcontrollers on the breadboard, don't worry, I didn't cheat

The one on the bottom is an Arduino Micro and is only being used for 5V, and the one on the top is an ESP8266 + FT232H breakout (uart/gpio/i2c/spi to USB) that just happen to be occupying the other half of the breadboard. You can see the edge of ESP8266 on the far left of the image. The spi.asm file is easily usable in another project, just #include it at the bottom of you code.
#17 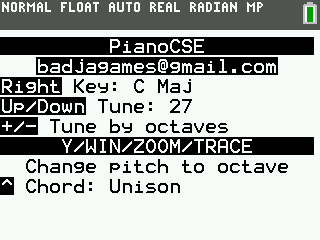 It was surprisingly easy, all I had to do was change the include file, add a delay for the keypad, and update the text to fit the new screen. The hardest part was adding the DCSE header+icon, which wasn't too bad once I understood what I was doing

Bug reports are welcome and encouraged!
#18 May 12, 2015, 12:10:11 AM
(I'm not sure if this is the correct place for this topic, feel free to move it mods)
A few years ago I started to work on building a Menger Sponge entirely out of business cards. If people bug me enough I might get around to finishing it some time.
#20

April 26, 2015, 12:33:29 AM
I made a simple 3D demo in PICO-8, currently there is only support for drawing wireframe shapes and point clouds. There are also a few bugs, but I think it looks pretty great! (You can see one of the bugs in the screenshot)