You could update and then downgrade freely.

With the only exception of TI-84 Plus coming preloaded with Boot 1.03, in which TI had moved from a 512-bits RSA signature to a 2048-bits one - so the only accepted OS were 2.55+ (so 2.55 only, as no update has been released since).
But the intent wasn't to prevent downgrading, or they would simply have checked the version.
They wanted to prevent us from being able to install modified OSes, for example with a patched exam mode...

Those were the good old days.
For the first time in history, we now get a downgrade protection on a TI-8x Flash calculator, the TI-84 Plus CE.

In fact, it is very similar with the TI-Nspire downgrade protection, except that just the first 3 version digits are being checked.

The TI-Certificate following the header of any 5.1.5+ OS file is now holding 2 versions number :
- the OS file version
- the minimal allowed OS version to set

When an OS install suceeds, the minimal allowed OS version, if higher, is written to the calculator Flash memory, in the TI-Certificates page, a zone which you can't reset with official menus.
When you start an OS transfer, the TI-Certificate being at the start of the file is among the first sent things. So the calculator immediately checks if the received version is higher or lower than the minimal allowed OS version. In the later, the transfer is immediately aborted.


All OSes 5.1.5 to 5.2.2 have a minimal allowed version set to 5.1.5, which might appear as non-excessive to you.
But when you know that since OS 5.1.0 you can easily crash your calulator with only 3 short lines of TI-Basic, it's still being harmful to all TI-84 Plus CE owners. 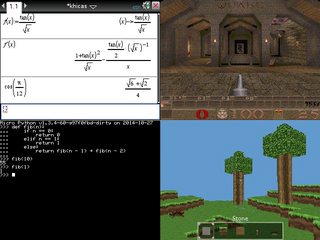 Ndless is the TI-Nspire's "jailbreak", which makes it possible to run programs much more powerful than those allowed by TI's approved tools (Basic, Lua), by taking advantage of native code (C/C++/ASM/etc.).

Unfortunately, on August 18th, 2016, Texas Instruments released the OS 4.3 version, which blocked the ability to install Ndless 4.2 and additionally forbade going back to OS 4.2.
That was a very unwelcome gift for users who accepted the update without being aware of the consequences, as well as a growing proportion of users since then, given that brand-new TI-Nspire CX calculators started coming preloaded with OS 4.3 months ago.

In fact, it's the usual scandal, going in dramatic ways against users' interests, because it forbids programming with Python for their school needs (multiple French high school classes / projects, etc.), or protecting their private data contained in their calculators from some exam watchers illegally allowing upon themselves to go through the calculators' contents, making snapshots and adding them as proof in their fraud reports, as reported over the past few years.

Three days ago, the OS 4.4 version was released, still based on the same philosophy of forbidding valid and legal usages

This version created a hearbreaking dilemma, as for once in a while, the new version brought multiple new, really useful features ! 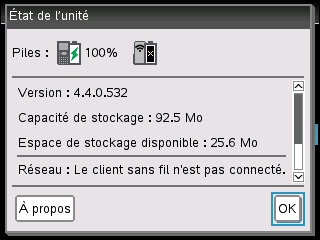 However, clearly, a vulnerability was found, and it took the Ndless team only 3 days to release the retaliation to Texas Instruments, the new Ndless 4.4 version ! 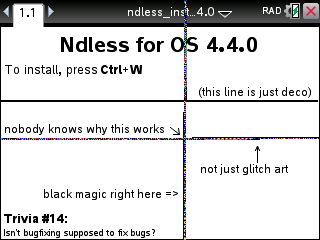 As indicated by its version number, the install program targets OS 4.4, with this time, lots of humor and references aimed at poking fun at and taunting Texas Instruments

nSonic2MS, the program making it possible to prevent exam watchers browsing the machine to find stuff, was also updated for OS 4.4 compatibility.

For those fortunate enough to own TI-Nspire CX calculators with hardware revision V or older (assembled until October 2015), the ControlX boot manager was also upgraded for compatibility with OS 4.4 et Ndless 4.4. It's executed at Boot1 level, i.e. long before Ndless, and offers
Don't miss your chance - if you have a TI-Nspire CX, take advantage of the fact Ndless 4.4 can, at the time of this writing, be installed on all TI-Nspire CX calculators worldwide, to install ControlX, and nSonic2MS while you're at it (don't make a gamble on exam watchers not doing illegal stuff) !

In 2017, for the last French exam session where the unfair exam testing mode won't be used, you'll be able to take advantage of Ndless like your older peers - on the condition of not accepting a possible future OS update, should Texas Instruments produce one in the meantime.

New screen, with a new buffer geometry.
The new buffer is 90° rotated making it 240x320 instead of 320x240, and mirrored.
To give you an idea, if you run on a CR4 some code which does not support the new screen it looks like this : 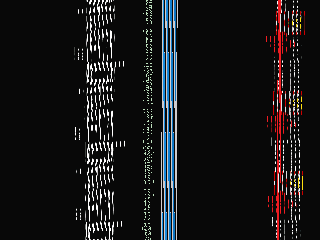 So either we will have to rebuild all existing Ndless programs, most authors having moved on, and for some of which the source code is not available...
Either a future CR4 Ndless could have some kind of a compatibility layer...
But even in the latter case, it would imply writing the screen buffer two times (normal writing of the original program + fix writing), and so it would have a high performance cost for programs constantly refreshing the screen (nDoom, nQuake, emulators...) - we can expect a halving of the fps if there is no CR4 update.

As a result, natural antidowngrade protection: OS / Boot2 / Diags versions 4.0.0 and earlier will not work properly.
Versions 4.0.1 or newer are mandatory. 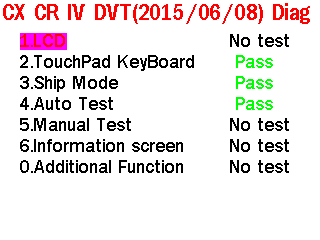 According to the new Boot1 log, the new TI-Nspire CX CR4 are faster as slightly overclocked:
156MHz instead of 132MHz - and therefore a 18% speed increase !

Boot1 also has a new boot combo : [doc][enter][1] allowing to reflash the Manuf partition with an RS232 sent image.
Perhaps finally a way to repair TI-Nspire CX calculators whose Manuf has been damaged.
4 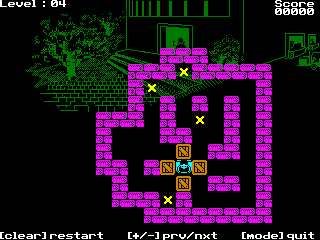 The game was developped in C using the online compiler in less than a day - as the tool has been greatly enhanced since last november with Androides and Crystann.

40 levels to challenge and enjoy with an increase in difficulty.

Here is a little playthrough of levels 1 to 13, and I promise you, the fun is only starting... 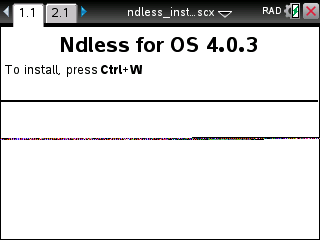 For those who are not aware, Ndless is the "jailbreak" of the TI-Nspire, which allows you to run programs much more powerful than what TI normally allows (Basic, Lua), as they can be written in C/C++/ASM ("native" programming).

You can now enjoy your favorite Ndless programs on your Nspire CX or CX CAS.
For instance (in reverse order of release/update):

With walls which can disappear, ladders, suspended ropes anf fiends, it may look like a Lode Runner.
But it is much more than that with treasures, traps, secrets and magic items... a dungeon-scale adventure !

So you're called Crystann and have decided to become the greatest mage of the kingdom. Thus, you must enter the Diamond Dungeon to steal the valuable Jade Statue which contains the Ultimate Incantation.

The dungeon is so big that you may have to make a plan of the rooms you visit. The Great Portal where you start is particularly important, and you'll have to come back to it many times...
The dungeon is inhabited by two venomous monsters, the awful Red Medusoids. They can teleport in all the rooms where they wove their network of Spiroids, to pursue you and try to kill you. If they touch you, you lose some of your life force... And without it, you'll eventually perish.
Fortunately, you'll be safe on suspended ropes, as the Medusoids won't be able to cling to them despite their powerful tentacles.

In the dungeon you will find number of traps, but also secrets and magical items :
To help you in your quest, a great sage once engraved valuable insights into the dungeon portal : 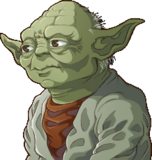 Last hint, here is a small playthrough of how to pass the left tower of the dungeon, up to the point of the game where you'll have to choose your way forward :

More accurately, it's an adaptation of a Lode Runner like game released in 1985 by Infogrames.

In this game, you have to collect all parcels of a room filled with walls, ladders and suspended hand-to-hand bars, in order to access the next room.
But you'll have to avoid the deadly android guardians who are constantly going to pursue you everywhere !
Fortunately, you can make a wall disappear for a short period in order to access new places or to trap androids.

Here's a Youtube playthrough up to the 3rd room :

But there are many more rooms if you dare !

For better performance, the game uses the CE's LCD 8bpp mode.
It features a new key scanning method compatible with simultaneous key presses. Quite useful to run before the very reactive androids !
It's also used to make block disappear, the key combo being [alphs]+[left/right].

As you can see, there is no lag. A useless sub loop has been adding specifically in order to slow down the game which was originally totally impossible.

Once again, the game was built thanks to the TI-Planet online C compiler for the CE, and as usual it's open-source.

January 13, 2015, 06:12:25 PM
Texas Instruments officially announced today its new "TI-84 Plus CE" calculator for back to school 2015 discovered in a previous news, which will be logically demonstrated at the T3 international conference in March 2015 at Fort Worth in Texas. Availability is scheduled for spring 2015.

If we understood well at the journées APMEP and the salon Educatec-Educatice last November, France will get a specific model, the "TI-83 Premium CE". Remains to be seen whether this will be a simple francisation the TI-84 Plus CE keyboard or if there is something else lurking back there which could justify the use of the 'Premium' word...
In all cases these models are sharing the 'CE' suffix and apparently developed simultaneously. So they should share many similarities and the following lines should be valid for both models.

The official page therefore presents a calculator equipped with a 16-bit 320x240 pixels backlit color display, the same as the one in the TI-Nspire CX and TI-84 Plus C Silver Edition. The operating system clearly seems to be an evolution of the one in the TI-84 Plus C Silver Edition, since we're noticing exactly the same user interface. As a consequence, one remaining question would be whether the defects of this previous model have been fixed or not, and in particular its extremely slowness due to using the same processor as the one used in the latest monochrome TI-84, a z80 to 15MHz, with a display needing (320×240×16)/(96×64×1)=200 times more data to be processed for each refresh.

The model is described as 30% lighter than the older TI-84 and much thinner. Indeed, the AAA batteries disappear in favor of a rechargeable battery.

It will be available in different colors.

USB connectivity is present, this time on the side of the calculator, with a mini USB A/B connector, together with a charging LED. 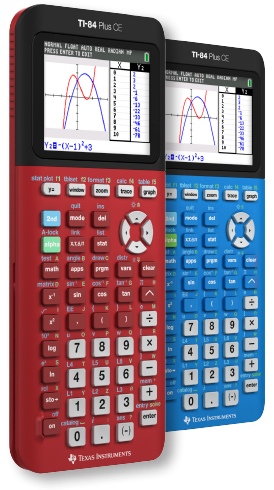 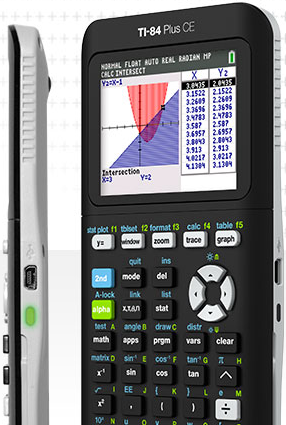 The Vernier website, a long time partner of Texas Instruments, has also been updated and tells us a little more about this new model.

Furthermore, it is stated that the TI-84 Plus CE will not work with Vernier LabPro and TI-CBL2 interfaces, nor with TI-Navigator hubs. This could indicate the removal of the mini-jack 2.5 historical connector which was the only way to connect these devices. By extension, TI-Robot and TI-Keyboard would also be incompatible.

Vernier also tells us about something else, the "TI-Charging Station CE", which can store up to 10 TI-84 Plus CE while recharging their batteries, apparently using contacts which must be located on the bottom of the calculators - ideal for classroom use.