Anyway, nice to see you on Bandcamp ^_^

lol thanx.  Also the default setting in BandCamp is that if you don't have an account, you're only allowed to play the same track (or 3 different tracks) 3 times before they force you to make an account.  The Song/Album owner can change that to set it for 100 plays for non-account users.  When you click your name on the top it'll give you 3 options (Profile, Tools, Home).  Click Profile, then scroll all the way down to "Streaming" and it'll say " Limit paid tracks to (insert number here) plays before requiring purchase".  Not sure if that applies to free tracks though, haven't tested it myself.

EDIT: Although now that I think about it, it could just be for people that have an account but are playing other people's songs.  Correct me if i'm wrong though
#3

February 24, 2017, 04:56:14 PM
Decided to make a BandCamp account.  Updated first post with link.  Only got the first album up so far, will do the others during the weekend.  All albums/songs are free to download and for those of you that don't have an account, you are allowed 100 listens on each song before the site decides to do that annoying "join for unlimited listens" pop-up

Also the song's have been properly tagged on the site... no more "subtitles not showing on almost every player" issue.
#4

Take that for what it's worth
#5

also i went to Chiller Theater in Parsippany NJ with my gf who was dressed up as a storm trooper (wanted to be Darth Vader, but there weren't any female costumes for that one).  We took pics, but their in her digital camera and we never had the chance to get them to her computer cause the weekend was "eventful" to say the least (will probably post them next week).  We had a good time (mostly bought alot of s*** like two giant FNAF stuffed animals), didn't get a chance to meet anyone cause the autograph/photo lines for Tim Curry & Meatloaf were wrapped around the hotel, but they had other guest star panels (like a pr0n star one, I spotted Sara Jay & London Keyes).
#6

Tech, Science, IT discussion & News / Re: Post your internets speed

Only if you like being behind a desk in one room anytime you use the computer cause my desktop is directly connected to my router via Ethernet cable.
#7

Long Island, so I'm below you (about 4 hours distance)
#8

Tech, Science, IT discussion & News / Re: Post your internets speed 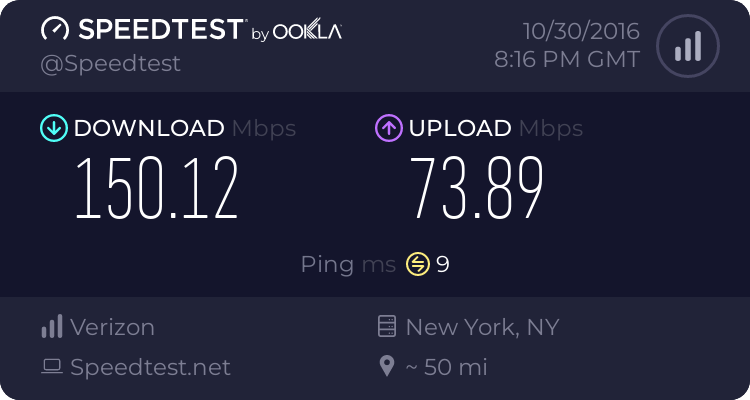 Gaming / Re: Nintendo to send themselves a C&D letter by accident tomorrow or maybe NX leaks?

Otherwise, I'll be doing what I do everytime a new console/handheld comes out.... wait a year after it's release, and then depending on the amount of games on it that i would be interested in playing*, I'll buy it for $100 less

Other / Re: WikiLeak's current situation

This pattern is getting really f***ing old.  It's the same "cry rape/misogyny/etc..." bulls*** that SJWs have been using ever since GamerGate and even before that, only now you have people in government positions pulling the same SJW tactics and speaking the same rhetoric to people outside the internet just to get Hilary in the Presidential seat because "muh vagina".  The white knighting that's taking place by her "soldiers" is just as disgusting.. You have facts and evidence plastered EVERYWHERE that Hilary has done some major league f***ed up s***, but rather than just accept that they messed up, they would rather double-down on their bulls*** and have old & new media say things like "y-yea, but... Donald said THIS to a woman!  Look how horrible HE is!!!" or "BLAME EVERYTHING ON RUSSIANS!!!".  And now their f***ing with Julian Assange by killing his internet connection and blasting him with all these accusations.

When it comes to Hilary, it's like watching a 5 year old acting autistic as f*** and then bawing her eyes out while s***ting her pants because the other kids aren't treating her like a princess in those Disney movies she watches because they know not only is she retarded, but she purposely instigates them.  As an adult, would you defend her and scold the other kids for "being mean to her" or would you think "Ok they have a point" and send the mini-Schizo to a therapist so she can get the help she needs.  The fact that everyone associated with her is doing the former rather than the latter is frightening because it's pretty much telling everyone else "Hey kids, did you know you can get away with all of these crimes and not be punished for them?  Isn't that great?!?!"  Law & Order?  WTF is that even?
#11

Quote from: DJ Omnimaga on October 11, 2016, 04:29:30 AM
For the second Cloud Cruiser song, maybe specify it's a remix, because in my playlist both have identical titles.

I actually DID specify that it was a remix, the thing is that my ID3tag editor has an option to separate the subtitles from the actual title, but most music players don't display it, hence why the file name of the songs have the subtitle on them so that there wouldn't be any confusion.

September 05, 2016, 03:18:34 PM
Note that it's the advertisers that are being butt-hurt about "questionable" videos that are marked for ad-revenue, but the system is broken as f*** that even innocent channels like make-up channels are getting hit with the bot-strike.  YouTube is just watching out for their bottom line, even though Google outright said that YouTube is not making them any money.  It's just realy d***ish of YouTube to wait till NOW to tell everyone "oh yea um, we've been doing this s*** for like a year now, we just never told you about it"

Easy Solution: PATREON FOR EVERYONE!!!