February 03, 2019, 12:47:10 PM
I've unearthed one of my old pull requests and now we can (finally!) have proper Python games on the NumWorks calculator. The missing bits were keypad readout and some basic graphics primitives (zardam's time module was already merged some time ago). I've scrambled together a Pong game to showcase this:

Drawing performance is honestly quite terrible because the framebuffer isn't memory-mapped, but it's enough for a smooth Pong and probably other basic games in real time. Redrawing the full screen on each frame would require drawing the entire screen in one go pixel after pixel (like the third-party firmware GESTE did), not unlike racing the beam on the Atari 2600, but doing that from within MicroPython would be challenging.

I'm working on an integrated turtle Python module for the NumWorks calculator (https://github.com/numworks/epsilon/pull/748). It's coming along rather nicely: 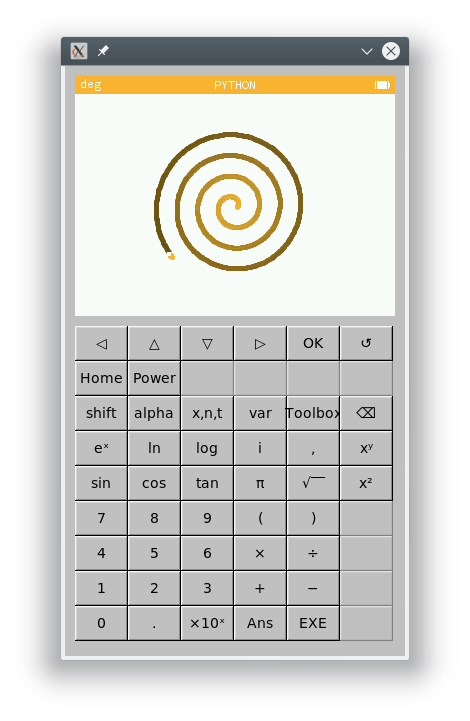 I've also done a RPN app for those who are addicted to HP calculators (https://github.com/boricj/numworks-rpn). The basics are here (16-level stack with nearly all operators on the kerboard implemented), but there's a lot of room for improvements. Turns out there are enough people interested that I get pull requests on this project from time to time. The discussion thread for this project, for lack of a better place, is at https://github.com/numworks/epsilon/issues/35#issuecomment-417885356.

January 01, 2016, 10:30:14 PM
Well, it's not really an announcement anymore since the news spread to every major calculator website community, but I thought I should create a topic here just for good measure.

Quote
Ran out of presents to rip open? How about ripping open your HP Prime for science?

This is Rip'Em, a third-party firmware for the HP Prime calculator. It is a (rather primitive for now) unofficial bootloader that replaces PRIME_OS.ROM and is currently written by someone who doesn't know what he's doing.

For now, unless you can connect to the 3.3v TTL serial port inside the calculator nothing too exciting will happen.

What you can do with it for now :

Current plans and what you can do to help :

Source code available over at https://github.com/boricj/ripem. Kudos to Lionel Debroux for being the first one to run a third-party firmware on the HP Prime.

As always : please void your warranty in a responsible manner. I will decline any responsibility should you turn your HP Prime into the thinnest CAS calculator brick available currently on the market.

Since I wrote this post the dummy payload has been updated to display the current time on the LCD screen. So now even without connecting to the serial port inside the calculator slightly exciting stuff will happen.

Next goal is the keypad.
Pages1
Powered by EzPortal