3D model that could be an interesting 3D printing and painting idea. xd

As for micropython, if it was to be implemented on 68k calcs, I'm very curious about how much heap and stack memory there would be. On the TI-84 Plus CE-T Python Edition and TI-83 Premium CE Édition Python calculators, heap memory is extremely limited to the point where pure TI-BASIC is actually superior for game dev. Also, my older TI-84 Plus CE lacks the extra chip required to run python scripts so I need to buy a special device and attach it to my calc if I want python on it. But it's TI we're talking about, here, so perhaps on 68k, maybe there could actually get better heap/stack mem?

EDIT: As for myself, I finished two music albums at the end of February and I've been working on many First Fantasy: Mana Force CE-only updates in the last few months such as the addition of treasure chests, four extra dungeons (via second quest like the NES Zelda), new graphics and fixes, but since 2016 I've only released one brand new game.

I also need to figure out why sig images won't appear in my sig.
5

April 25, 2021, 02:10:28 PM
Welcome back! The forum side of CodeWalrus is kind of R.I.P nowadays but the Discord has more users and there are still some of the very old users like Lionel on IRC (when our IRC bridge actually works) and tr1p1ea on Discord. You'll be surprised but even MaxCoderz had new posts lol.
6

April 25, 2021, 11:34:43 AM
Pretty neat 3D printing idea! Plus if you eventually use LED light bulbs they tend to last longer when not using an enclosed light fixture. Do 3D printers in general print exactly the same size as you specified or do they print slightly smaller or larger?

As for 68k calculators, the TI-BASIC on them, even without ASM/C libs, is pretty good in terms of functionality, despite being as slow as z80 calcs. There's also a new version of Newprog that came out for the TI-89 recently, which is supposedly similar to Axe in concept.
7

April 23, 2021, 12:18:24 PM
I like the dark room effect! I wonder, though, why is there two HUD? Are you planning to add multiplayer or something? Also I noticed in the screenshot that you move slightly faster than on the real calculator, but I got one of those first CE hardware version that had slower flash or something I think.


EDIT: I found a bug: I was on the password input screen and let it sit there for a minute, then the calc turned ON and when I turned it back on, the game was in full color mode instead of 8 bits. While typing the password the screen faded out once too before reappearing instantly.
9

April 22, 2021, 09:41:16 PM
That could be a nice feature! I guess I lost the habit of saving my passwords, since such system is becoming increasingly rare nowadays.
10

For some reasons I can't seem to find enough keys in the first stage of part 1 to get very far, though. I need to play it again to check what I might have missed.
13

April 15, 2021, 12:19:32 PM
I love the attention to details so far, a lot of old calculator games just had enemies disappear instantly with no animation when dying. Very nice job so far. I also like the title screen star animation. Reminds me a bit of Final Fantasy The End screens. I would make it so that when pressing Clear you can reset the current stage (or quit the game) via a confirm menu, for when we get stuck. I can't wait to see the new sprites for enemies and bosses.
14

It adds treasure chests to most dungeons.
15 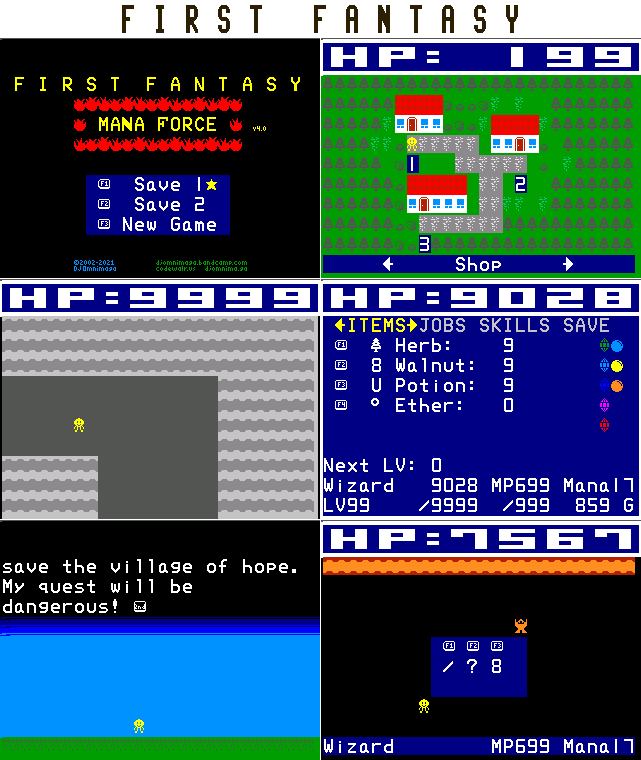 -Four bonus dungeons added via an entirely new quest unlocked at the end of the original
-Some graphical improvements in dungeons and the village
-Title screen copyright layout changed and reduced in size
-In-game controls that are displayed on-screen now shows up as button icons for better readability.
-Fixed save loading bug introduced in 3.1.
-Some dungeon colors and graphics changed.
-If a second quest is started after beating the game, a star now appears besides the save file on the title screen.
-The last error mentioned in the previous version changes might have finally been fixed once and for all.